Welcome to the Acer Store Ireland

We noticed that you are browsing from a different country. Please note that all items available on the Acer Store Ireland ship only within Ireland.

THE REPUBLIC OF IRELAND

The following annex is part of the general terms and conditions that govern all online offers, sales and purchases through the website(s) currently located at https://store.acer.com/en-ie/ (together with any successor site(s), the "Site").

a. WEEE Directive: means Directive 2012/19/EU of the European Parliament and of the Council of 4 July 2012 on waste electrical and electronic equipment;

d. EEE or electrical and electronic equipment: means electrical or electronic equipment as defined in article 3 (1)(a) of the WEEE Directive, being " equipment which is dependent on electric currents or electromagnetic fields in order to work properly and equipment for the generation, transfer and measurement of such currents and fields and designed for use with a voltage rating not exceeding 1 000 volts for alternating current and 1 500 volts for direct current" ;

e. Producer: means any natural or legal person as defined in article 3 (1)( f) of the WEEE Directive,  that:

(ii) is established in a Member State and resells within the territory of that Member State, under his own name or trademark, equipment produced by other suppliers, a reseller not being regarded as the ‘producer’ if the brand of the producer appears on the equipment, as provided for in point (i);

(iii) is established in a Member State and places on the market of that Member State, on a professional basis, EEE from a third country or from another Member State; or

2.1 The information set out below applies to EEE as follows:

3 Information for user of the EEE


Users of EEE in private households may request information on: 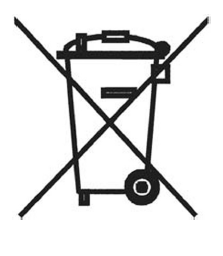 Please click on the below links to find your nearest local recycling centre, Public Collection Day, Electrical Retailer and Bulb Exchange Store. Waste portable batteries can be recycled at your local newsagent.